How to Change American English to Australian English on iPad

American spelling just isn't the same as ours. I must have been so excited to get my iPad that I forgot there was a difference between English and British English, which we speak here in Oz.

It's been many, many months that my iPad marks my words with red underlines when I spell English words correctly.  It kept trying to put the letter Z into "recognised" or take out the U out of the word "colours".  American spelling just isn't the same as ours. I must have been so excited to get my iPad that I forgot there was a difference between English and British English, which we speak here in Oz.

How to change your iPad dictionary from American English to British English:

If you'd set up your iPad by choosing English, the iPad will default to American English - the iPad is designed in California after all!

However, it's not fun to have the proper spelling corrected all the time when typing in Aussie or British English.

It's also not so good for Australian children to wonder if they are spelling things correctly on their iPad - or learning the spelling of a continent half a world away!

Fortunately it's easy to get your iPad to speak Australian...

Here are the steps to change the default language of your iPad:

When you do the iPad will go black for a moment and display the words "Changing Language" and in a few seconds it will be back with a new way of spelling! That's it, your spelling will now be more appreciated by the Queen.


Photo 1: Finding the International setting in your iPad Settings App 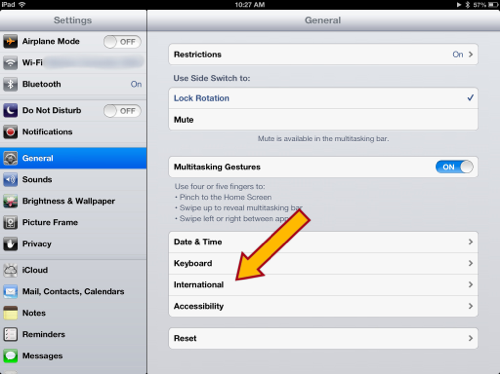 Photo 2: Changing the Language of your iPad to British English 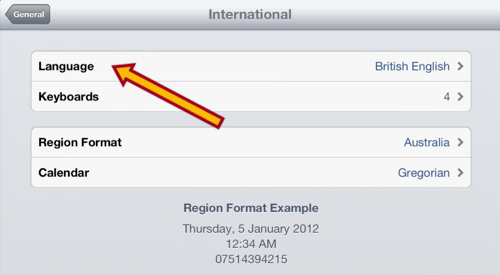 In the International section of Settings you can also set the Keyboards available, the Region Format (this should say the country you're in), or alter the Calendar format to Japanese or Buddhist calendars from the standard Gregorian calendar if you want to.

See the Set Up an Emoji Keyboard on iPad post for info on making your typing and text messages a little more fun with Emoji. Highly recommended for Children's iPads.